skip to main | skip to sidebar

My yamaha outboard has an exhaust port straight above the propellor. Because of this [or so I thought] , reverse thrust is miserable, and I had some really nasty situations not being able to stop/maneuver the boat in strong winds.

I first tried tot block the outlet with some foam and drilled two outlet ports about 10 cm higher. 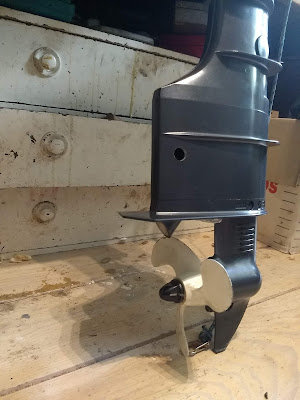 Unfortunately this was a bit too simple to be KISS. Reverse thrust was great but in forward I had lots of ventilation  problems because of the exhaust gasses being sucked to the propellor. I just lost way too much forward thrust.

I tried to overcome this with an extended cavitation plate. 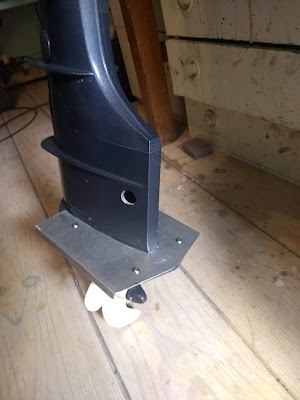 But..... unfortunately this didn't work either.

Searching the internet I found an over 30 year old (!!!)  boatingmagazine article by Jan Alkema (a fellow dutchman!) about exactly the same problem. His trick is to redirect/'bend' the exhaust gases upward instead of downward to the propellor with a simple tunnel made of some metal plate.

I made this tunnel with polyester molded over the outboard leg (polyester is terrible to work with, but the good thing is it hardens quickly enough to release the molded part within the hour and take it home). 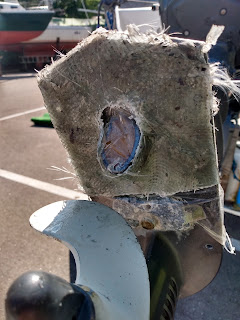 With the molded part and some wood and tape I made a mold for the whole tunnel. 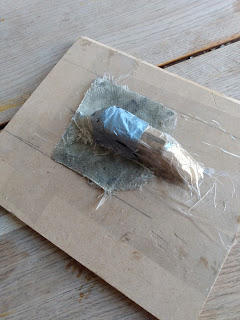 Molded part laminated with epoxy/glass and some plastic on top to press all the glass together without getting too messy. 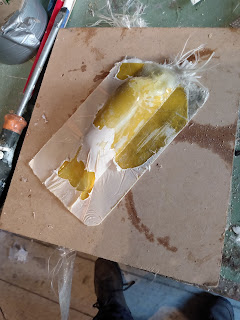 No it is not pretty, I don't care as long as it works. 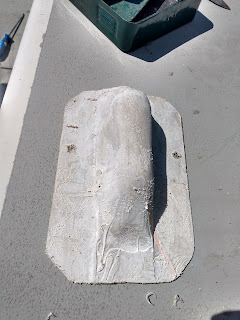 Below: part bolted to the cavitation plate. I covered the holes with some ducktape, and will cover them permanently with some glasstape with polyester wrapped around the leg. Polyester shrinks a lot and will thus result in nice tight fitting band. 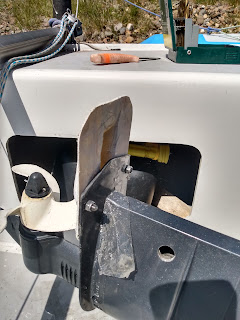 First impression: better reverse thrust and so far I noticed no ventilation problems forward. Only exception: going from full throttle reverse to full throttle forward the prop wouldn't bite immediately. I can live with that and leave the setup as it is.

After a sail a few days ago with lots of wind I had big problems with forward thrust so I removed the modification.
After some googling I noticed on sailing-forums that lots of other people with exactly my outboard (the yamaha 6 hp F6C four stroke) complain about terrible reverse power and are talking about fitting a 'high thrust' propeller (with bigger blades and lower pitch). So I've probably been working in the wrong direction, and should have started with another propeller (as someone also noted in the comments on this post).
I found a shop that sells a 'yamaha double thrust' propeller that according to the shop fits my outboard (although it seems to be designed for Yamaha outboards with a through-prop exhaust which my outboard doesn't have) and will give higher thrust.
I wil try it and else I will dump my outboard which I'm starting to hate, and buy one of the sailpower outboards of mercury or tohatsu that 'according to internet' - in contrast to the standard Yamaha F6C - work for sailboats.
Gepost door Menno op 04:07 1 opmerking:

Lots of problems with fouling in the salt water of Grevelingenmeer in the Netherlands. I have tried a new anti-fouling product: finsulate. It's basically a sticker wrap with fibres (bit lik a carpet) which should prevent plants and animals to stick to the hull.

First: put the boat on blocks. To do this I unfold the boat on the trailer (put smallish wheels on the trailer so the floats clear the wheels while unfolding). I wedge a piece of timber at the top of the cabin entrance to minimise flex. Then I jack up the (axle of the) trailer on two sides about 30 cm, put blocks under the floats, lower the trailer and pull the trailer away. 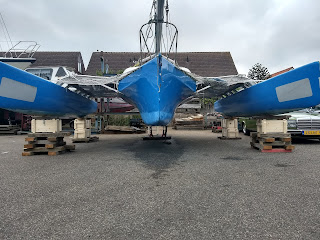 Next: removing old antifouling and epoxy priming. Then wrapping it with finsulate (the dark carpetish-stuff in the photo below).﻿ 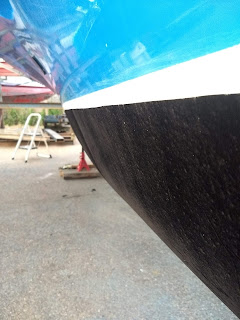 Unfortunately, at the end of the season it was apparent the finsulate - or at least the 'speed' version with short fibres I used - was not working for my situation, lots of growth made sailing impossible. 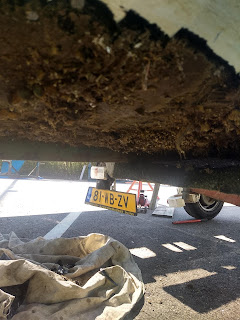 So, boat back on stands to remove the finsulate. Tried all kinds of methods to do this the easy way, but nothing worked. I had to cut it loose bit by bit with a window scraper ﻿(the kind with a Stanleyknive blade). What a pain in the.... 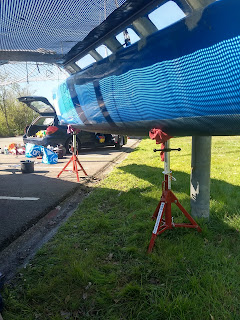 This time i invested in four foldable welding stands to support the boat. I wish I had done this earlier, this works great. Putting the boat on these stands takes me single handed no more than 20 minutes, taking it easy. 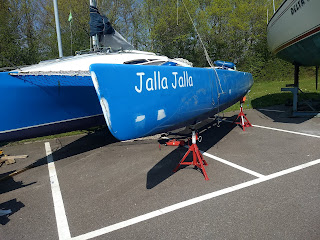 Now the boat is again painted with self polishing antifouling paint. In the Netherlands it has been decided proper working antifoulings with high copper ratios may only be used for commercial ships, not for recreational ships.
This has led to lots of people selling&buying commercial antifouling paint under the counter, or buying it in our neighbour countries (Germany and Belgium) where it is legally available for recreational craft. Other people try to enhance the antifouling properties of the recreational paint by adding copperpowder.
Maybe the effects of banning these paints without a working alternative people can switch to are worse than the intended positive (enironmental) effects.

After having my car sliding from a slippery ramp half into the water I thought it was time to make a trailer extension to be able to get only the trailer and not the car in the water.
It's put together with some galvanized steel square tube and an extra trailer hitch ball. 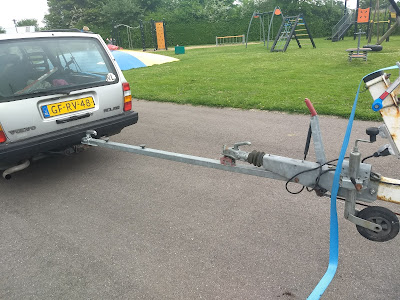 The extension has a reces at the far end which slides over a bolt in the tongue-assembly (the bolt is the rusty bolt near the parking-brake-lever). The extension bar locks on the ball by just lifting up the car-end of the extension. 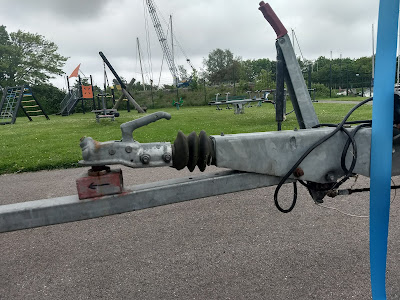 To carry the extension there is a ball on the trailer and a u-frame on the first crossbar: the back end of the extension lies in the u-frame and the front end is fixed by clicking it on the ball. 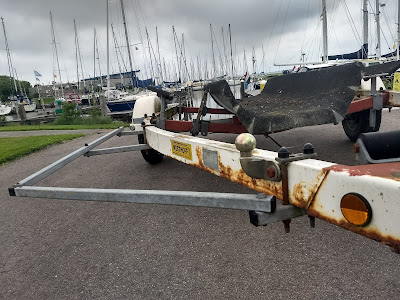 Next: antifouling with finsulate wrap.

Until recently I always had to put in or remove the top batten of the mainsail when hoisting and dropping the mainsail. On internet I found a very easy solution to keep the batten in the sail.
The trick is to not fix the top of the sail permanently to the top slider, but to make a tackle with dyneema with one end fixed to one of the lower sliders. Pictures are probably better than words, so.... 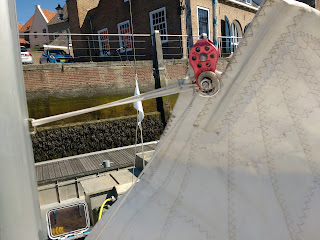 First I had doubts it would work, but at least for my size of sail it does.
The dyneema rope is slippery enough to not get stuck and the topslider doesn't get stuck either.


By the way: the top block on the mainsail is a climbing block: very strong, light and durable and way cheaper than sailing-blocks.

The standard anti-torsion rope on my jib has never impressed me much. Especially with a lot of wind, when you need it to work, it doesn't. The top of the jib would not furl because the line was not stiff enough (and probably because there is relatively little tension on the anti-torsion line compared to fixed mast-boats).


I replaced the line with Harken Reflex anti torsion rope. This rope is a normal anti-torsion rope but with a braided stainless steel cover round that rope. What a difference! I am usually a bit sceptical about claims of new products, but this works perfect for my setup.
﻿

The rope can be bought with expensive end-terminals, but I made them very cheap with aluminium press-sleeves, just for the fun of trying to replace some stuff with diy-parts.

Here is a test-piece with a normal alu press-sleeve I used: 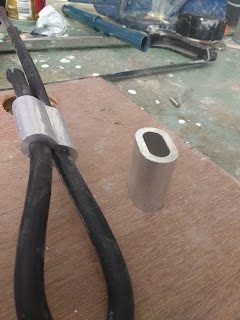 Unlike the official terminals it is a permanent fix: to remove the sleeve it has to be carefully cut into multiple pieces: 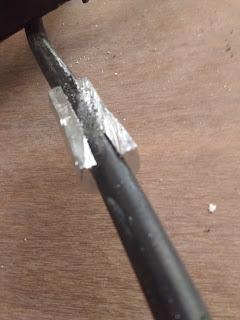 For extra security i tapped some m5 machine screws into the press sleeve to further lock the cable, but in hindsight this is overkill. 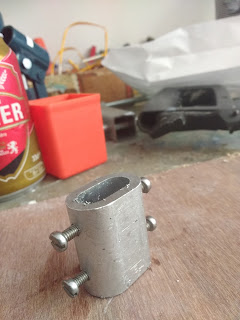 My cheap trick to press the sleeves, step 1: put sleeve in a vice with to big steel nails as 'press die' to (pre)form the sleeve. 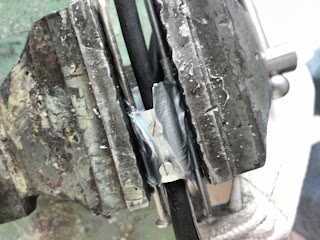 My cheap trick to press the sleeves, step 2: use some threaded rod, some steel bar, a small hydraulic jack and again a steel nail to get some real pressure on the the already preformed sleeve: 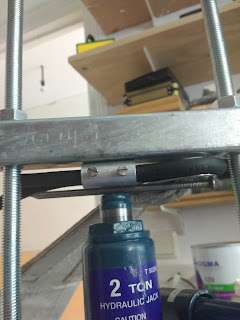 I bought some regular dyneema SK75 and at a fisheries-supply- shop a 'netting needle'....

I extended the nets a bit by using the all purpose-eye on the float to support the net. 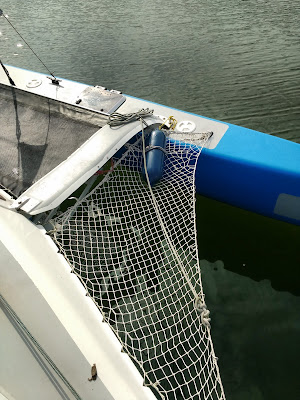 Knotting the nets was good fun. I use the nets to store fenders, to attach the front mooring-line, and as some extra security while moving on the boat. Plus my children and wife like to use them to hang out while sailing in calm conditions. 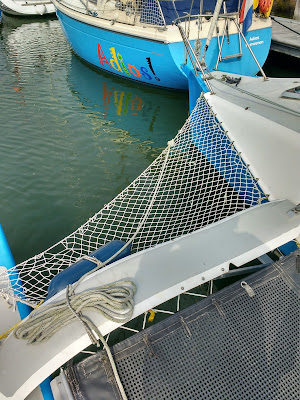 After my last post I dit some work on the boat and the trailer but my Phone with the pictures crashed. I will make some pictures of the trailer shortly and put them on my blog.

My anti  fouling is not up to the task of keeping the bottem clean enough. As an alternative to getting the boat out of the water and on stands to clean the bottom (can't do it on the trailer because I made the 'farrier-style' fitting tub on the trailer so most of the bottom is not in reach while on the trailer) I made a 'floating scrubber' with some pvc pipe, wood and a piece of doormat.

I didn't try to build it to last a long time, only to see if this idea would work. 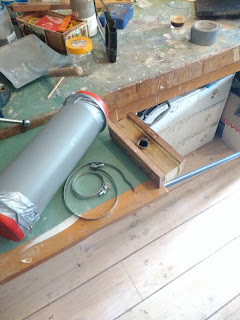 The idea is the bend stick allows you to reach the whole bottom with the scrubber, while the buoyancy provides enough force to effectively scrub the bottom. 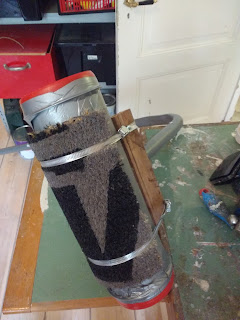 I used the scrubber while sitting in a small inflatable boat and it worked quite well. The scrubber was a bit too bouyant; I'll make another version with a bit smaller piece of PVC pipe and that will probably become my scrubber for the coming years.

Unfortunately it didn't get all of the fouling off, which was not a big surprise. The boat has been in salt water for over two years now. End of season I will get the boat out, do a very thorough cleaning and anti-fouling. After that I will use the scrubber as an extra to keep the bottom tidy.